Going sustainable to rejuvenate the suburbs

Suburbs are often spaces of poverty, unemployment and urban decay. But now many peripheral areas are becoming laboratories of innovation, hosting initiatives for a sustainable future.

This new trend also inspired the theme of the ongoing Architecture Biennale of Venice 2016 – “Reporting from the front”. It displays “the work of people that are looking for new fields of action, facing issues like segregation, peripheries, housing shortage, migration, crime, traffic, waste, pollution and participation of communities”, said Alejandro Aravena, curator of the international exhibition and winner of the Pritzker Prize (the so-called Nobel Prize of architecture).

An example of this comes from Spain. The Oliver district in Zaragoza is thought of as an area affected by petty crime, and the buying and selling of drugs. It also has high levels of unemployment and illiteracy (15% and 30%, respectively).

Foreign-born people make up 13.5% of the population, which is slightly higher than the rest of the city (11%). Most of the residents are African or Romani.

Now a social housing building is being used as a pilot for the regeneration of this suburb. The complex has been selected as one of the demo-sites of the European project BuildHeat, which promotes energy efficiency interventions for urban regeneration.

The building contains 53 social rented dwellings. “The tenants [struggle] to afford the energy bills,” explains Paloma Bozman, who works for the Municipal Company of Housing in Zaragoza, and is involved in the BuildHeat project. “It’s a building that needs to be improved. Everything is electrical: heating system and domestic hot water.”

“Moreover, because of the lack of income to pay for electricity, the inhabitants of this building resort to other alternatives. They use butane heaters, with all the risks that involves. Or they just deal with cold and hot temperatures,” explains Bozman.

The building has not undergone any significant changes since it was erected in 1990. The dwellings are spread over five blocks, each with five floors, including a basement and the ground floor. 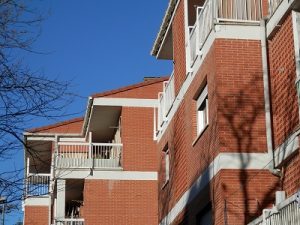 The renovation will include a photovoltaic façade and the installation of a heat pump on every balcony, to provide heating, cooling and hot water to each home. The pumps will be powered by solar energy. The insulation of the homes will also be improved. The building’s performance will be monitored from the start of the project and for up to one year after the changes have been implemented.

One of the main challenges of this urban project is ensuring the engagement of all neighbours and gain their confidence. “They receive us well and all agree to cooperate. The main reason for this is that we present the project with the social worker,” explains Bozman.

“They were quite surprised and interested in the innovative concept of [using] renewal energy and of course concern about the economic impact that this action could have on their life, as they have very limited resources,” says Bozman.

Nearly 11% of the European Union population – an estimated 54 million people – are unable to adequately heat their homes at an affordable cost, according to a study by the European Commission. The scale of the problem is due to rising energy prices, low income and poor energy efficient homes, and it is particularly prevalent in Central Eastern and Southern Europe, the study says.

Architecture and technology has much to do on that. Implementing new technologies is a key priority in order to increase energy efficiency and lower market prices.

See another story from an Italian suburb: The energy efficiency way of the washing-machine shaped dwellings in Genoa.

Taking complexity out of the building site

17 Jul 2019 - Researchers in Europe are developing a new kind of prefabricated energy efficient building façades, equipped with special insulation and solar panels. These solutions are built far from the construction site, in an industrial environment, and can therefore be installed quickly and painlessly for homeowners or tenantsTackling energy consumption in the building sector in Europe is a real necessity, and researchers in many countries are studying the development and dissemination of ... read more
Subscribe to our newsletter to stay up to date
We use cookies to ensure that we give you the best experience on our website. If you continue to use this site we will assume that you are happy with it.OkPrivacy policy